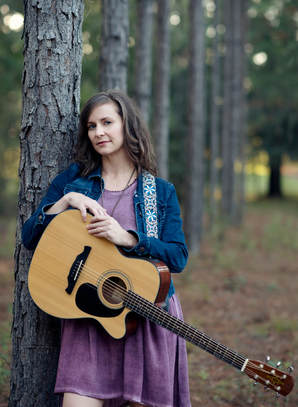 Rachel Grubb is a seventh generation Floridian raised in rural north central Florida.  She grew up singing backseat harmony to The Mamas and the Papas and songs from the Baptist Hymnal.  Fascinated by lyric and melody from an early age, it wasn’t until Rachel had a career and family that she found the courage to give songwriting an earnest try.

A relative newcomer to the Americana/Folk music scene, Rachel has performed at top festivals in Florida such as Florida Folk Festival, Gamble Rogers Music Festival and Will McLean Music Festival.  Rachel was a top 10 finalist in the Will McLean Best New Florida Song Contest in 2016 and 2017.  Rachel released her debut album, “Twists + Tangles,” in August, 2016.   She is currently writing songs for her next project, “Florida Home,” a collection of songs about life in rural Florida.

"Rachel Grubb writes lyrics with fearless honesty, delivers vocals with a unique and mesmerizing style and charms from the stage
with a thoroughly approachable and engaging charisma.  This is a talent whose star is rising. See her while you can still get a seat near the stage.  Buy her music and be prepared to listen over and over.”
-Mark Smith, Florida folk songwriter and recording artist

The songs on Rachel’s debut album “Twists and Tangles” are well written, well performed, and well produced.  Her natural vibrato carry the songs beautifully and you hear elements of folk, country, soul and blues - in other words a great Americana feel.  If you don't fall in love with this voice, you are not listening!”
-Larry Mangum, Singer-songwriter